Hey, and welcome to my list running you down the best trick decks out there!

Well, it’s probably because it was… And the odds are, they were using a trick deck…

Today we’re going to run down the best trick decks out there, with their uses, so you can either expose your friend and be a complete jerk, or blow other people’s minds and hope they don’t find their way here the same way that you did.

But before you get into that, here’s a brief history lesson on trick decks. (If you hate history well don’t worry because you can use the links below)

Ever since magic has been invented people have essentially been cheating… I mean I’m sorry kids but magic just doesn’t exist (as much as we all wish Harry Potter was a real thing.) Trick decks are essentially a type of gimmick designed after the standard 52 card deck which allows magicians to pull off performances that seem entirely impossible.

Every year new trick decks are created by the greatest magic minds out there, but today I will present only the best to you.

The great thing about stripper decks is that they can be used as a failsafe or plan B for your regular card tricks; imagine you are trying to control a card to the top as part of your Ambitious Card Routine, but you lose track of it. With the stripper deck, you can instantly locate it and keep on going like nothing has happened.

Essentially how the deck works is all the cards are facing a certain way, you take out one card (or the spectator selects it) you then spin the card so it is facing the other way (sounds weird but I swear that’s how it works) then when you run your hands down the side of the deck, their selection magically makes it way out of the deck and into your hands, as if pulled out by magic.

You can pick up stripper decks almost everywhere, but I would recommend the bicycle stripper deck! It has the most convincing effect as people are always less suspicious of a deck they know and trust.

Here’s a video of the stripper deck in action, (frozen version ;))

The Invisible Deck is definitely a favourite here at the Daily Magician and I’ll tell you why! It’s just one of the most versatile trick decks out there when it comes to any sort of performance!

Back in the day, and still now for that matter, my cousin used it in a mentalism routine where I would pretend to be a criminal psychologist… It was a sherlock kind of thing where I would show that I ‘knew’ the thoughts of the spectator. I would whisper in the ear of my cousin what card I thought they were thinking of, after which he would turn the card over in the deck. We would then set the deck aside.

After which they would name their card, without any funky business we would take the deck, and there facedown among faceup cards was their selection.

Pretty crazy effect right? Well… You can do it too… All you’re going to need is an invisible deck.

Joe Berg created the Invisible Deck in the 1930s, originally calling it the Ultra Mental Deck. Often mistakenly credited to Dai Vernon, Don Alan, or Eddie Fields, the most-used presentation of an “invisible” deck of cards was invented by J.B. Bobo.

Essentially the principle is every faceup card has a hidden card underneath it, corresponding odd or even based on what card they pick you open the deck of cards one way or the other.

It’s pretty simple but the trick works like a dream.

The Svengali Deck much like the other trick decks on this list works on simple principle yet creates an incredible effect, essentially:

The problem with this deck, and for that matter the invisible deck, however, is that you can never hand them to the spectator, or the trick is ruined.

Here’s the svengali deck at work: 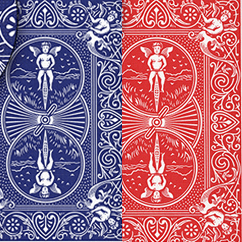 If you’re anything like me (and I hope for your sake you’re not completely like me) then you love easy, clever but mind-blowing card tricks. Of course, it’s hugely satisfying to learn card sleights, memorize maths tricks or maybe truly manipulate someone’s mind yet sometimes there really is nothing quite like a good marked deck!

Essentially, a marked deck is a deck that in some shape or form has a way that you can determine what the card is simply by looking at the back of it.

There are variations to the marking, for instance, some decks will simply allow you to determine if the card has been touched rather than the actual suit and number, while others go the full distance!

The best-marked deck I’ve seen is aptly named the ultimate marked deck and it’s produced by Bicycle Playing Cards! It has a marking system that is so easy to spot yet so easily missed by the spectator.

The Brainwave deck is essentially a variation on the invisible deck, except the card you pull from the deck is from a different colored deck.

It’s a pretty cool concept because it makes the spectator feel as if no sleight of hand is possible, the first few times this trick was pulled on me it literally blew my mind, so it’s certainly worth looking into this deck too!

Well, that was my Trick Deck’s rundown! Hope you enjoyed it! Have fun blowing minds!