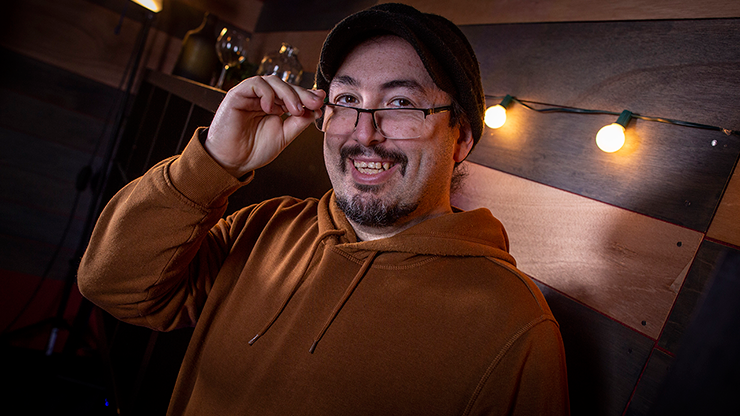 Dani Daortiz is a name that is often put before some of the greats in the world, for instance only yesterday I was looking at a line up for a magic convention which shall stay unnamed and I saw that his name came BEFORE the likes of Derren Brown and David Blaine…

Here are a few quotes I found about him just to get us started:


“Senor Daortiz is perhaps one of today’s top creative forces in card magic.”

“He is truly amazing and surprising.”

“Dani Daortiz is the biggest magician of our time,”


So what’s the big fuss? Why’s everyone talking about him and where did he come from in the first place.

So, if you want to know everything there is to know about Dani Daortiz you’re in the right place.

First, let’s start out with a bit of a history lesson.

Well, I have to say to find anything really specific about him was pretty difficult, for such a big artist in the magic world it was strange that he didn’t just have a Wikipedia page… But I suppose that’s why you’re here in the first place right?

Well don’t worry, I did get some information for you.

Daniel Daortiz was born in Malaga in a town called Estepona. He began his magic journey like many of us, as a small child at the age of 4 thanks to his father who gifted him a box of tricks.

At the tender age of JUST 12 years old, he went to the magic circle in Seville and experienced the magic of Mario the magician who by chance later became his mentor.

His mentors came in the form of such first-class artists such as Juan Escolano, Mago Migue, Juan Tamariz, and Lennart Green. All of which played their part in influencing his approach to magic (which can certainly be seen in the way that he performs.)

So with that out of the way, let’s delve into what you’re really here for!

The Magic of Dani Daortiz

Dani Daortiz has produced copious amounts of magic, both in form of live performances and DVDs you get easily get your hands on.

Fun fact for you:

According to Dani, the one thing you shouldn’t use when practicing magic is…

It sounds ridiculous, but hear me out.

Dani explains that while a mirror can be useful to an extent as a ‘reference,’ there’s one thing it will never be able to do—INTERACT with you

That’s exactly why Dani likes to get a large portion of his practicing done ‘at the table’ during performances. He’s constantly testing and optimizing elements of his show as they happen, relying on the interaction with his audience to guide him.

Want to learn more from the man?

If you’ve never watched the master at work, here’s an example for you.

Dani Daortiz has a style different from many magicians alive today, unlike Derren Brown or David Blaine who use the same tricks to make themselves seem inhuman Dani DaOrtiz is almost a spectator of his own magic.

His constant repeated mantra is that of “I don’t know, I don’t know.”

Once you start watching his show you simply can’t stop, he looks so untrained, so ‘accidental’ that his tricks become all the more amazing.

Dumfounded after watching a few of his performances? Well, let me give you the SECRET to one of them.

Do you see the video above? Skip to about 10 minutes in and just watch the magic he performs, crazy right? Impossible.

Okay now watch it again, just after he riffles through the deck watch his right hand from our perspective. Yes, he really is that confident. He literally just placed the card down right before the eyes of the audience’s eyes and no-one saw it.

Because no-one expected him to.

So what can we learn from that? Truly your persona and the way you display your magic are one of your greatest tools. Take Derren Brown, for instance, not many people are looking at his hands because they believe he’s doing everything with his mind. In the same way, when Brown uses a gimmick everyone believes it has to be something more than that even ‘supernatural’.

A card magician like Lennart Green, however, has a completely opposite effect on his audience; everyone is looking at his hands because that’s how he’s built up his persona. Whether you’re an amateur or professional magician it’s always good to remember that performance is everything, take the worst trick in the world, and package it up the right way and everyone will freak out.

So, with that in mind, let’s watch part two together.

The magic just does everything itself right? No skill needed?

In reality, Dani is one of the most calculating, methodical performers I know (and that’s a compliment).

He literally engineers his shows to create the maximum feeling of ‘chaos’ while simultaneously orchestrating every little moment that takes place—from the way the chairs are arranged to the way he drops cards on the floor.

In fact, one of Dani’s greatest assets is his attitude of ‘I don’t care.’

See, when the MAGICIAN says he doesn’t care…the audience suddenly doesn’t feel it matters much which card they pick, which number they pick, which pile they pick (when in reality, it ALL matters) – which makes it so much easier for Dani to get them to do what he wants.

See if you SPOTTED this in the video…

-The boldest ‘spell to a card’ trick I’ve seen (the kicker ending on this is off the charts – Dani has some serious cojones to pull this off!)

-How Dani ‘forces’ his audience to call for an encore performance (I won’t give this one away, but if you watch closely, you may just figure it out)

Dani Daortiz teaches us how to hide magic from audiences:

If you’ve ever struggled with getting set up for an effect while your audience ‘burns’ your hands, you might want to check this out…

It’s a beautiful book filled with incredible effects, but one of my favorite sections is where Pit talks about a concept called ‘The Performance Mode.’

(A concept, according to Hartling, first discussed by Rafael Benatar in a 2001 issue of MAGIC Magazine.)

Out of respect for Pit and Rafa, I won’t go into excessive detail here, but the basic premise is this:

If you’re sat at a table performing for a crowd, there are natural ‘lulls’ or breaks between individual effects. Immediately following the ‘climax’ of a trick, the audience reacts, laughs, and the tension eases.

Many performers are savvy enough to use these off-beat moments between performances to perform all the ‘dirty work’ for their next effect.

But Benatar’s genius thinking was this:

What if you could work those same ‘breaks’ into each individual effect?

In essence, by creating off-beat moments that feel unplanned or improvised, you can do all kinds of sneaky stuff without the audience suspecting. This isn’t misdirection, it’s simply that your audience doesn’t assign any importance to what they’re seeing—because they don’t recognize it as part of the effect.

Pit goes into this concept in much more depth within Card Fictions, so I’d definitely recommend picking it up if you haven’t already.

By implementing it, you don’t need to worry about audiences ‘burning’ your hands…because they simply won’t recognize whatever’s happening as important in the first place!

Another magician that I think intrinsically ‘gets’ this concept is Dani DaOrtiz.

Scroll up to the first video again to see Dani performing and see if you can spot this concept in action.

Okay, this video probably isn’t what you were expecting…

It’s Spanish magician Dani DaOrtiz, Juan Tamariz, and friends performing a magic trick that can only be described as ‘utterly bizarre’ or perhaps ‘borderline offensive’.

WARNING: don’t click that link if you aren’t prepared to see Dani DaOrtiz topless. It’s not for the fainthearted.

But I’m not just showing you this for ‘kicks’.

You see, here’s the real ‘secret’ to Dani’s success:

He doesn’t take himself too seriously.

I see this problem ALL the time with magicians, especially new ones.

They think they need to get dressed up in a suit, grow a mustache, and learn how to talk like a 19th-century aristocrat if they want their magic to have ‘maximum impact.’

The good news for all of us non-cosplay junkies is that this couldn’t be further from the truth.

While a more refined air can lend itself to some performers (see Derren Brown or Guy Hollingworth for example) more often than not, a casual chilled out vibe can INCREASE the power of your magic.

This is espcially true for amateur magicians. People like Hollingworth can afford to perform the way they do because they have the ‘chops’ to follow through on it. But if you’re not a professional, taking yourself too seriously can be a major mistake. On the flipside, if you turn up at the card table with a chilled out, self-deprecating vibe, who cares if you drop a card here or there?

Just watch Dani, or his mentor Juan Tamariz, to see this concept in action.

So that rounds up our post on Dani Daortiz! His best magic tricks, performances, and really all you need to know about him!

Hope you enjoyed and Dani Daortiz if you’re reading this, we love you!