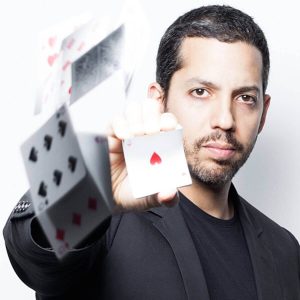 Does David Blaine levitate or is it all just an illusion?

David Blaine has been impressing us for years with his incredible TV specials and one of his most famous tricks is his incredible levitation that he performs effortlessly at any time!

The effect: David Blaine approaches a group of people on the street (real spectators I imagine) and in his deadpan style informs them that he is going to levitate. Real casual, no expression.

Obviously, the spectators are pretty doubtful at this point. I mean, realistically, most people would be. Levitation is impossible, right?

That’s what they think until David Blaine rises seemingly a foot or so off the ground before falling back down, with no wires or cables attached to him. Here’s the video if you want to get a better look.

So does David Blaine float for real? Surely this is true magic? There’s no way this could be fake.

Well, unfortunately I have an obligation to let you guys know that David Blaine is NOT actually floating within this video. He is using a classic magic technique that I won’t reveal here but will point you in the right direction to learn. It’s called the Balducci levitation and can be learned in not too much time at all if you have a go.

The reason I wanted to talk about this levitation is because for me, it highlights one of the reasons why David Blaine is such a great magician.

All the time we see David Blaine doing incredible things with his body for our viewing pleasures; he turns himself into a human water hose, regurgitates live frogs, and immerses himself in solid ice blocks for days on end!

These are, as far as I know, real stunts that are accomplished purely through practice and technique. 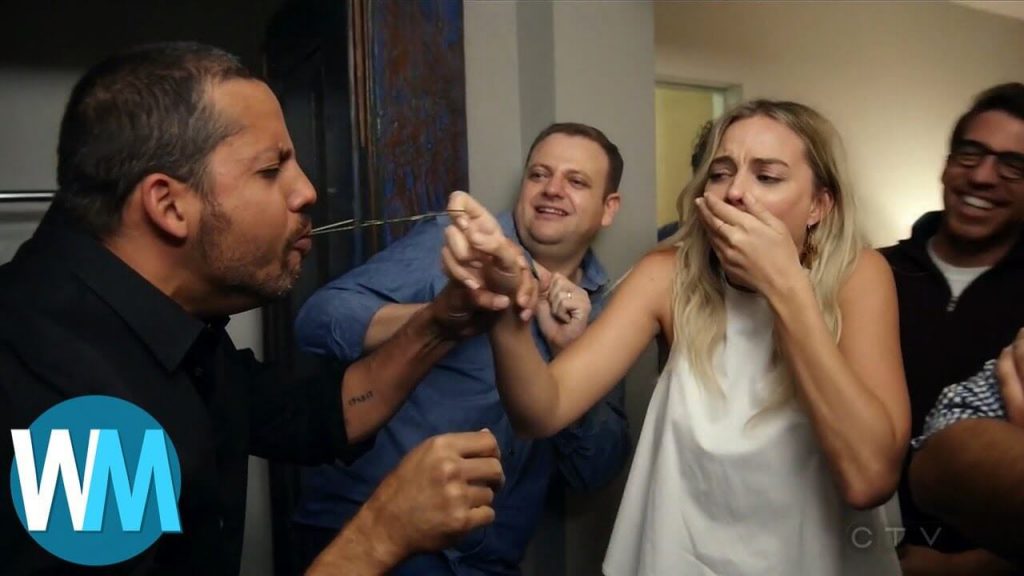 However, once David Blaine starts doing things like going out onto the street and levitating in front of people, there’s a small part of our brain that says ‘if he can do all these other insane stunts, why is it so hard to believe that he isn’t doing it for real this time?’

I know that we don’t actually believe that, but it’s enough to cast a small bit of doubt into our minds as to whether this trick might just be pure magic, and we ask ourselves ‘does he really do it this time?’.

Some of David Blaine’s greatest stunts include:

Stunt No.1: Holding his breath for 17 minutes 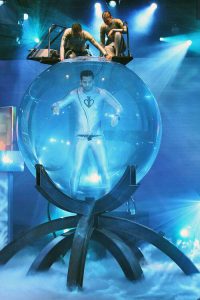 I struggle to get over 1 minute sometimes! This is a crazy stunt that was pulled on the 30th of April live on the Oprah Winfrey show. Blaine was able to set a new world record of 17 minutes and 4 seconds of holding his breath.

This was a slightly different record to the regular breath hold as he had been breathing pure oxygen beforehand.

Still, what an achievement! I don’t think we can potentially label this one as a trick due to its status as a world record- Blaine needed to do it ‘properly’ for it to count.

Here’s the iconic Ted Talk Blaine gave describing how he prepared for this stunt. 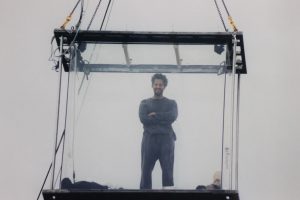 This one is a little more up in the air in terms of whether or not Blaine actually pulled this stunt of for real or not. According to his claims, he went without food for 44 days in a row, surviving only on water.

Oh, and all whilst dangling in a box over London.

Of all the places to try to pull a stunt like that, London would not be my first choice. Reports have it that onlookers would bang drums as Blaine tried to sleep, crowds would even tempt him with hamburgers and projectiles would be thrown directly at his box!

Despite all this, no experts seem to have been able to come to a solid conclusion as to whether this stunt was actually carried out or whether it was just an illusion. Nutritionists commented that the fact he didn’t seem to be losing weight could suggest he was secretly taking in food, however the water they tested didn’t seem to contain any trace of supplements or minerals.

So did he do it? I genuinely don’t know for this one.

Read more about the analysis of this stunt here. 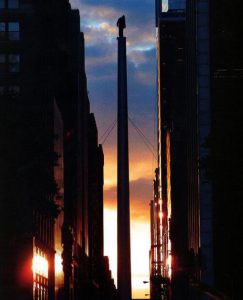 These stunts just seem to get more and more weird as they go on, don’t they? Of all his stunts, this is perhaps the most unusual one. Blaine took it upon himself to spend 35 hours stood on the top of a 90ft pole in Manhattan with no food, water or…well, anything.

He took a few calls and even gave a radio interview, but that was more or less it.

I don’t think so. This stunt isn’t quite as impossible sounding as the previous one and so I doubt David needed the help of any trickery to accomplish it. It was most likely boring, wet and cold, but definitely not impossible.

This video is pretty poor quality but it gives you an idea of what this stunt looked like.

Stunt No.4: Standing in an ice block for 63 hours 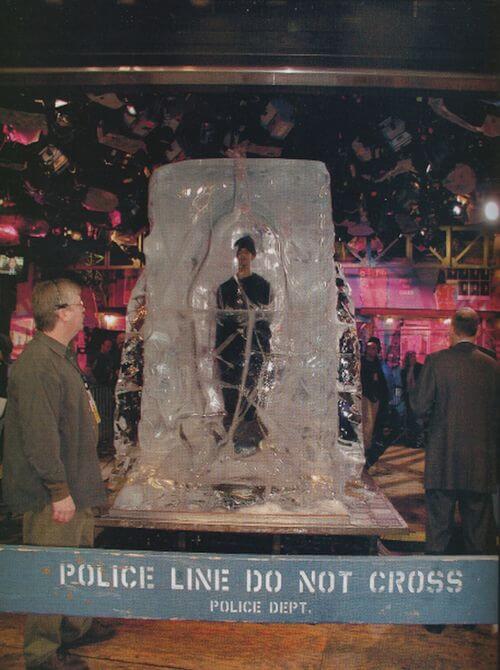 What is it with David Blaine and staying still for hours on end? This time he encased himself in a solid block of ice for almost 3 days, before finally being removed by chainsaws once his time was up.

After training for a year with ice-cold water, Blaine believed he was ready to give this stunt a go, and so set up the stunt and made arrangements for it to be aired live for everyone to watch.

While this stunt impressed a lot of audiences around the world and even earned Blaine a whopping $1m, other magicians weren’t too impressed.

Of the stunt, Penn Jillete (of Penn and Teller) commented ‘Pumping hot air into a phone booth and putting ice around it, and standing around without a thought in your head isn’t a trick…the hardest part of this trick is being in there and looking good without a shirt on.’

David Copperfield also said ‘If you look at the physics of it, it’s warmer than a down-filled sleeping bag in there.’

So, the consensus on this one points towards it being an illusion rather than a stunt, although Blaine himself swore it was simply an ‘endurance experience.’

Stunt No.5: Buried alive for 7 days

Wow. Before I started writing this article, I had actually forgotten just how many crazy stunts this man has pulled off. This one was his very first public endurance feat, taking place in April of 1999.

Blaine was buried in a glass coffin under a water filled tank for seven days and nights, and managed to survive on nothing but liquids.

I imagine this stunt was for real; Blaine wouldn’t want to risk using trickery for his very first public appearance.

Stunt No.6: Electrified…whilst standing on top of a pole. 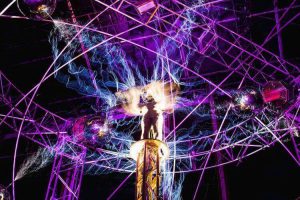 Does this man ever stop? As if just standing on poles wasn’t already enough, Blaine took it one step further in October 5th of 2012, when he stood on top of a 22ft high pillar in New York for 72 hours…whilst being connected to an electric current of over a million volts.

Whilst Blaine claimed this was his most dangerous stunt yet, according to physics professor John Belcher, what he did was not actually dangerous in the slightest.

Blaine was wearing something called a Faraday cage, that took the entirety of the current itself. Blaine just happened to be standing inside it.

Sure, that still sound pretty intense to me but it definitely wasn’t as life threatening as Blaine was making out, so I think this one can be deemed an illusion rather than a stunt.

Some other stunts of David Blaine’s include: 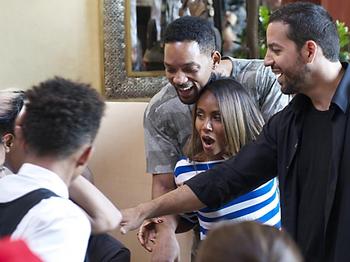 Blaine freaked everyone out when a live frog emerged from his mouth on the Jimmy Fallon show! I think this one was for real, and that makes it even more crazy!

David Blaine has poked an ice pick through his arm and hand a few times now, enough times for me to give in and say that I think this trick may be for real too.

This is also real I believe. Blaine first swallows huge amounts of water, and then a small amount of fuel. He light a fire, spits up the fuel to really get the fire going, and then douses it all in a huge dose of water. All whilst looking incredibly bored!

What all this means

I decided to call it a day there because, whilst I could go on, I think these examples illustrate exactly my point regarding the question ‘does David Blaine levitate?’. The answer is, for me, no. However, Blaine has blurred the lines between incredible bodily endurance and trickery so many times that it is hard to say for certain.

Did you enjoy this article? Do you think he really does it? Do you have any comments or feedback regarding this article? Let me know in the comment section below and I will get back to you within 24 hours.

Does David Blaine levitate? You tell me!

If you’re interested in becoming the next David Blaine, check out my how to learn magic guide available through the top menu! If you want to read about other great magicians, check out my best magicians of all time post!