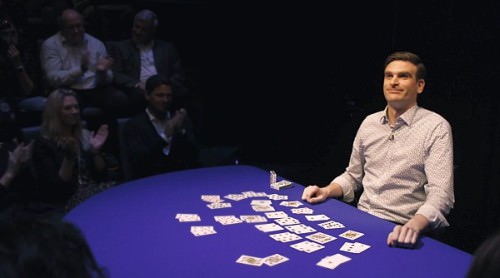 Well, here we are again with the pleasure of talking about a magician we have actually met and interviewed 🙂

If you’d like to hear our live interview with Denis Behr, you can head here:

However, don’t worry if you’re not here for that… – although you should be it was a great podcast 😉 –

If you don’t want to skip ahead to the interview, here’s everything I can tell you about the german magician and card sleight legend: Denis Behr.

Just to ‘wet your appetite’ let’s read a few quotes together about the man:

“Denis Behr is, undisputedly, one of the finest thinkers with a pack of cards in the world of magic.”

“Denis is a brilliant ‎magical thinker and it was a real pleasure to watch him work.”

In a basic summary: the man is a magic animal.

One of the ways that Denis Behr was first flung into the magic scene was through his now widely watched YouTube videos.

Below are a selection of some of his recent videos (including my favourites!)

(Watch for the tabled faro shuffle… One of the hardest sleights in card magic that only a small handful of magicians can complete.)

How did Denis Behr start magic?

What you’re about to read is not found in many other places on the internet!

(so we’re very excited to share it with you…)

…and as much as I’m tempted to try and recall Mortiz’s story from memory, I thought it best that he simply tell the story himself.

So here it is straight from the beginning of The Of Sleights and Men podcast:

DISCLAIMER: I wrote this up using a piece of software that transcribes audio to text and my own listening ears… So it’s not perfect! Feel free to help me with corrections in the comments below.

Jacob: How did you actually end up getting into magic?

Denis Behr: Well, like most kids, I guess I just was interested in the idea of magic and magicians as I was young. So there are pictures of me dressing up as a magician at age five or something like this. But actually performing and practicing magic tricks came a bit later. I was like, eight, maybe I got the metric set. Actually, it was the metric set that my mother already used when she was a child.

That’s what I got first and then I got some others.

And just well, that happens to almost every child, I guess. But most stop again. And I didn’t so I just continued buying magic books and magic sets and magic tricks. And well, I definitely think that first mostly children’s parties like my own birthday parties, and then About birthday parties and kind of pop magic, some self-locking, some manipulative everything. And later I drifted towards card magic more or less as a teenager because I bought all four volumes of college in the 90s. They came out earlier in German and in English. When I was about 15, I think I got all four at once, which was a huge investment back then for me. And yeah, I fell in love with card magic. And well, that’s still the main focus.

Denis Behr On The Making of Conjuring Archive

If you know who Denis Behr is, then you almost certainly know about Conjuring Archive.

Here’s him speaking about how it all got started:

(check it out here https://www.conjuringarchive.com/)

Jacob: I mean, essentially, why did you start the conjuring archive where it all began?

Denis Behr: Yeah, I’ve always loved books. So I got a lot of books already as a teenager. We had in the 90s and 80s. A bookseller hotel formula from Munich. I wasn’t in Munich back then, but I had mail order, of course, and he was selling secondhand books. And I bought a lot of books from there, because they are much cheaper than new books, of course, and he had good taste and knew what to recommend.

So I bought a lot of books. And after a while, when you have a lot of books, you find it difficult to locate everything, you know, you know, there was something might even remember, like the page, but not in which book this page was in. And so I thought an index would be good, just for my own library. And I started writing one just on computer files, like Excel sheets that are cost linked. And that started in the late 90s.

But after a while, I thought, well, the internet is everywhere now. So it might be useful to have this online, so I can access it from everywhere. So eventually, I did an online version that went online, I think in 2004. And that was the basic start to index, all the books I have, and I’m still working on that. So that was the beginning. There are now more than 2000 books indexed. And well, it’s getting more and more, more.

Denis Behr On The Making of Conjuring Credits

Here’s Denis Behr on the creation of Conjuring credits:

Denis Behr: The Conjuring Archive has the table of contents of all the books in categories.

So if you’re researching an idea or something like this, or a certain plot, then you can do this day, of course, and you stumble upon a lot of interesting leads.

But if you want the essence, just like the origins of certain ideas for that we have a different website, containing credits. And this just has the very bare bones of any idea of the seat of this came from a file.

That was mostly the work of Max, Maven, and Steven Minch. And that became this website. And we’ve expanded it with lots of articles about certain things. And that’s constantly evolving. So we are updating the entries all the time. And of course, that’s one of the good things of having like an online thing and not printed, Encyclopedia or whatever.

So we can always update it when you old information comes up. And sometimes people provide us with some old reference, and we can put it in and stuff like this. And so that’s supposed to make research. Well, easier and clearer. And everybody can look it up. So yeah, so we can, more or less the people that invented all the stuff. And we can avoid publishing the same ideas over and over.

Denis Behr’s Latest Releases! (And where you can donate to him)

If you’d like to buy some of Denis Behr’s work, the best place to go is the link I’ll put below where you can buy Handcrafted Magic and The Expert at the Card Table playing cards:

If you’d like to donate to Denis Behr and help him keep Conjuring Archive afloat, you can donate here:

If you’d like to secure our exclusive interview with Denis Behr and 10+ interviews with the world’s best magicians (for as low as $0.50) click the link below:

In this exclusive segment with Denis Behr, we discuss:

*The reason Denis Behr tells people NOT to use the memorized deck (he’s only half-joking here)
*Why Denis Behr spends so much time studying the mem deck.
*Why Denis thinks the memorized deck is IRREPLACEABLE (while the bottom deal can be easily substituted)
*His insights on a famous quote from Pit Hartling’s book ‘In Order to Amaze,’ and why it’s one of the best descriptions of the raw power of a memorized deck
*Denis Behr’s thoughts on Marlo’s faro notes (he might of been one of the first people to ever ‘properly’ study them)
*Our discussion on fractal patterns and the memorized deck (and why they’re far more similar than you’d think)

Well, that’s all for today on Denis Behr! He was an absolute pleasure to talk to and has certainly helped move magic forwards in ways that no-one else even dreamed of!

We salute you Denis Behr!