Ideal My First Magic Set is the cheapest of all the magic kits I’ve reviewed so far, but it still packs an impressive amount of magic into the box! 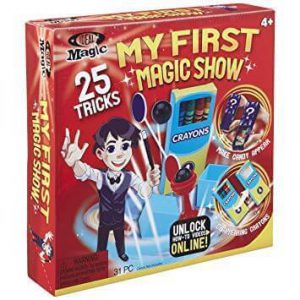 Most magic sets I review are aimed for children between 7 and 12 or so, but this kit is targeted at 4 and over. As a result of this, some of the tricks will be a little obvious, however are ideal (no pun intended) for the lower age range due to their simplicity.

If you’re shopping around for older children, I would recommend checking out my breakdown of the top magic sets for older kids here.

Alternatively, Ideal do also produce another magic kit aimed for a slightly older audience. If you read to the end of this post, I’m going to be breaking down exactly what it is and whether it’s any better than this one. But if you want to find the best magic set for between 4 and 7 year olds, this is the best place to be!

Personally, I think magic is a great hobby to get your kids started in young for a few reasons.

Firstly, it can hugely help in developing communication and people skills from a very young age. One of the most important aspects of magic is the ‘patter’ (what you say and how you say it) and working on it often will definitely improve the way you communicate.

Secondly, on a similar note, magic can definitely help with confidence. Being able to do ‘magic tricks’ is a great way of breaking the ice and getting to know people!

So, how does this magic kit measure up?

What is the Ideal My First Magic Set?

This magic kit is produced by Ideal toys and includes 31 props and pieces; enough for 25 cool magic tricks. With over 500 reviews (averaging 4.3 out of 5 stars) this is one of the most popular sets on the market right now..

Ideal are a toy company that actually offer a range of magic kits. I’m planning a review of there magic kit for older children that comes with about 100 tricks and a suitcase that doubles as a performing table! Keep an eye out for that one.

This set is a great introduction into the wider world of magic. It’s also great as a ‘taster’ set; if you buy it for your child and they enjoy it, you could consider buying a more advanced one with even more magic for later down the line.

The magic tricks are very simple to learn and an instruction booklet is provided, along with video instructions by professional magician Ryan Oakes.

Where Can You Buy It?

This set is available from a number of online toy sellers. The best deal I could find was at Amazon; only $16.26 compared to 20 dollars or so when bought from elsewhere.

The only thing you should be cautious of if buying from Amazon is that during the holiday season, magic kits like this tend to jump in and out of stock, so you should probably buy early on to avoid potential problems further down the line.

As I mentioned previously, you get a total of 31 props and pieces that allow for 25 different magic tricks. Here are a few of the potential effects you can accomplish…

Read on until the end of this overview for a video of these tricks being performed by magician Ryan Oakes!

The Ball and Vase features in most magic kits, and that’s for a reason. It’s easy to do, and looks great.

For any of you who haven’t seen this trick before, it goes a little something like this:

And places a ball inside it. He closes up the vase and waves his hand over it. When he opens it up again, the ball has disappeared!

This is a easy to do trick that uses what looks like a completely ordinary pack of coloring crayons.

The magician shows you a pack of crayons; they look completely ordinary to the spectator. He then turns the pack over and says the magic words. When he turns it back, the crayons have gone! 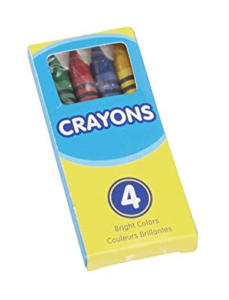 This trick actually really impressed me the first time I saw it. It really looks like real magic!

The magician shows you an ordinary pack of crayons and an empty drawer. With a simple wave of his hand, the crayons VANISH from the pack. Cool, but that’s the same as the last trick, right? 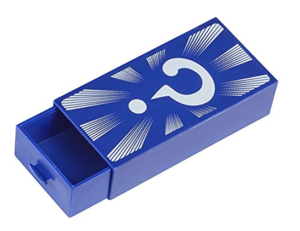 It’s not over yet…

The magician opens up the drawer which we previously saw was completely empty. Inside the drawer are the crayons!

It looks impossible, but like all the other tricks in this set, is very simple to accomplish and won’t be an issue to learn. I haven’t seen anything like this trick in any other magic set (and I’ve seen a lot of magic sets!). So whilst this kit may be tailored for younger children, that doesn’t mean the tricks are any less impressive!

This is a crazy optical illusion that will fool adults too. It works on a very simple principle but will confuse 99% of the people who see it.

The magician displays two ordinary colored strips like this. 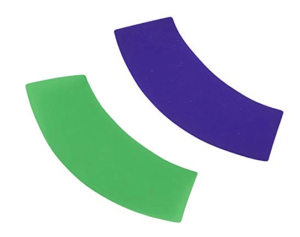 When he lines them up next to each other, we see that the green one is clearly smaller. However, as soon as the magician picks it up and says the magic words, it magically grows in size. When the magician places it back next to the purple strip, it is visibly bigger.

If you’re feeling adventureous enough, you could even hand the same curved strips to the spectator and allow them to do the trick themselves. Watch as they amaze themselves!

Once again, this is another very impressive visual piece of magic that surprised me when I first saw it.

The magician shows you a black and white drawing inside a frame. He grabs the drawing and slides it out of the frame. As the drawing comes out, it magically fills with colour! This is a really cool trick that is again unique to this set. 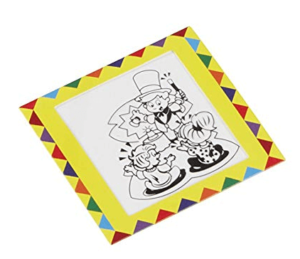 Here is a video displaying all of the above tricks. The magician who demonstrates the tricks is actually the same one who will be teaching them to you through the instructional DVD!

As you can see, they look great and are surprisingly fooling.

The Ideal My First Magic Set is perfect for children aged 4 to 7, and in my opinion, even older than that! I know I would enjoy messing around with a couple of the tricks myself and seeing what was possible with them.

For a very affordable price, this set packs a lot of magic.

Now, there was one criticism that seemed common. Many reviewers reported that some of the tricks were perhaps a little too advanced for the age advertised. Most of the tricks I outlined above didn’t seem to be too difficult but a couple others that come with the set were reportedly a bit confusing.

However, it was always going to be hard to design a magic set that would keep 4 year olds busy, so I think that they’ve done a really good job overall.

Would I recommend? Absolutely.

Did you find this review useful? If so, please do share it with your friends using the social icons provided.

If you still have any general questions, feedback or comments feel free to drop me a line in the comment section beneath this article and I will get back in touch within 24 hours. If you’d prefer to get in contact with me directly, just fill out the contact form at the bottom of this page and I will be back in touch over email.

Thanks for reading my review of Ideal’s My First Magic Set!

Although the Ideal My First Magic Set is a great investment, it isn’t for everyone. It’s way too young for children aged 7 and up for the most part. Here’s a good alternative by the same company. 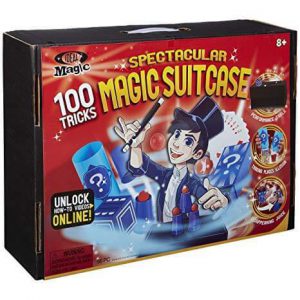 If you liked the look of the My First Magic Set but you didn’t think there was quite enough magic actually involved, this kit is a much better alternative.

The magic kit is taught by the same magician as the previous kit, Ryan Oakes. It teaches you 100 magic tricks, 75 more than the previous set!

Some of the tricks included in this set…

The Cups and Balls

The Cups and Balls are an absolute classic of magic and they tend to pop up in almost all magic kits. Unfortunately, they weren’t part of the My First Magic Set; maybe the creators deemed it to difficult a trick for younger children.

This kit does include them, so you’re all set to wow people with this classic trick.

The Cups and Balls generally consist of the magician placing a ball beneath a set of cups and gradually performing more and more astonishing magic as the ball disappears, reappears, and changes places. The great thing about the Cups and Balls is that it’s easy to learn but hard to master. That makes it ideal for ALL ages.

A top hat and a wand is a costume that everyone will instantly recognize as a magician. The top hat that comes with this set is collapsible and can be used in combination with a bunch of the effects supplied.

This is one of the coolest parts of the set.

Often when people recieve their magic kits, they have two questions.

Where do I put all this magic?

What do I perform this magic on? I can’t carry my table around with me…

This magic set attempts to provide a solution to both these questions in one. The set comes with a storage box that also doubles as a performance table.