The Melissa and Doug magic set is my No.1 choice for magic kits for young children. It’s well made, it’s interesting, and above all, it’s fun. 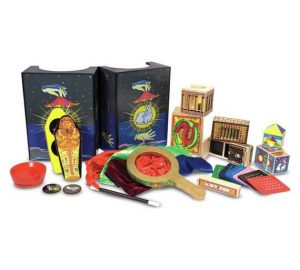 One of my biggest complaints with most of the magic kits available on the market is that they’re all so similar. Sure, that doesn’t mean they’re not good, just that the majority of them use exactly the same magic tricks. Once you’ve seen one, you’ve seen them all.

However, I was actually very impressed by the range and variety of the magic provided by this set. The tricks are much more unique than A LOT of other kits on the market, and although there’s less overall magic, the quality of what’s there is a lot higher.

When we also take in consideration the fact that this set is made of wood, it rises even higher in my rankings. One of the other most common issues is that the props you get from magic kits are plastic and break easily.

This kit really stands out from the competition as the tricks and props are so original- and made of wood to boot.

What exactly is this magic set?

The Melissa and Doug Magit Kit is the one of the most popular kits on the market with over 1000 reviews on Amazon (averaging 4.4 out of 5 stars).

The set is manufactured by toy-makers Melissa and Doug and contains 10 easy to do magic tricks that are designed for children, along with instructions on how to perform the tricks. The tricks included simple to learn, but don’t underestimate how ‘fooling’ they can be if done right.

This set is also around 10 dollars cheaper than most of the other sets on Amazon, which I think is a pretty good deal, especially when taken in consideration with the fact that the props are wooden rather than plastic.

Where can you buy the Melissa and Doug Deluxe Magic Set?

This set is available from quite a few online retailers, but your safest bet is probably Amazon.

A word of caution though: magic kits tend to be in high demand during the holiday period so it’s possible that this set might dip in and out of stock. Buy now to avoid missing out!

What’s included in the kit?

This is a super easy trick that looks pretty cool and is sure to baffle your spectators. The magician displays an ordinary red ball, and an empty box.

He lets you examine the ball to make sure it is totally normal, and once you’re happy that there’s nothing fishy going on, he places the ball inside the empty box and covers it with the lid.

With a simple magic gesture, he moves the lid so you can see into the box. The ball has disappeared! There’s definitely no chance he’s hidden it either; the bright red ball is nowhere to be seen.

However, once again he closes up the box and says the magic words. This time as he opens it, the ball is there!

This is a nice and simple trick to get you started that won’t be hard to learn. The box is (like the rest of the set) made of wood and so looks and feels very sturdy.

This one is kinda tough to explain, but I’ll give it my best shot here.

The magician takes an ordinary coin and places it inside a wooden box. He closes up the box and shakes it; we hear the coin slide around the box. He opens it up to display the coin is still there (obviously!).

He closes it up again and shakes it once more. Once again, we hear the coin shake. This time, when the magician opens it the coin is gone! This is one of those tricks that just ‘doesn’t make sense’ to the audience; they LITERALLY hear the coin slide around yet it is completely gone when they check.

This trick actually really impressed me. The principle it uses is a classic of magic and is used by professional coin magicians all the time; but luckily for you, it’s super easy to do with this prop.

The magician has just got a coin signed by a spectator; so it’s one of a kind and there’s no other coin like it in the world. At this point the magician could make the coin disappear.

Can you guess what’s inside the pouch?

Yep. The SIGNED coin of the spectator (one of a kind, remember!).

For a magic trick from a kids magic set, I was impressed with the quality of this trick. Professional magicians around the world have been utilizing this effect for years, believe it or not. And now you can too!

This is a classic trick that many of you might be familiar with. The magician shows you a bunch of cards with a collection of numbers on.

This is another unique trick that I haven’t really seen the like of before. The magician shows a cube, and a wooden hollow box.

He places the wooden hollow box over the cube. However, when he turns it around, the cube is gone! The cube has somehow magically escaped the solid wood box.

The magician lifts up his hand to reveal that HE is holding the very same cube.

What I liked about this trick was the fact that it is so different. Most magic kits recycle a very similar set of tricks. Don’t get me wrong; there’s nothing bad about that, except that as I mentioned earlier, buying one set pretty much means you’ve seen them all. That’s what makes THIS kit stand apart from the crowd.

This magic trick involves the magician placing an ordinary colored silk into a pouch and making it disappear and reappear at will. The colored silks are really attention grabbing and the trick looks great visually.

Like the rest of the kit, the pouch is very well made too.

Another difficult trick to explain, but one that will definitely completely baffle your audience.

The magician takes an empty rectangular box and places three colored cylinders inside it. The order of the cylinders is noted as they go in; red, green, blue. However, after the magician says the magic words and slides the cylinders back out, they’ve somehow changed places within the box and so the color order is changed.

This might not sound like the most impressive of tricks but it looks great. At the end of this outline I’ve included a video of these tricks in action and you can see this one at minute 2:47

This is another hard trick to explain! It might also take a little more practice than some of the others in this set but I think it’s definitely worth taking the time.

Without going into the details, this trick allows you to somehow magically predict the exact actions of your spectators using an Egyptian sarcophagus. Sound weird? It is. But in a good way. 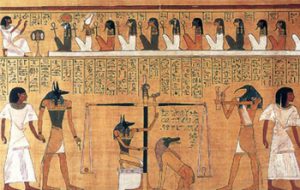 I’ve seen a few paper-to-dollar tricks before but this is the first time I’ve seen a prop in a magic kit that multiplies coins!

The magician shows the audience a single coin, and places it inside a dish. He shakes the dish back into his palm and not one but THREE coins fall into his hand.

Now, before you get too excited, this is just a trick. The magician doesn’t actually multiply the coins. Regardless, it is still a fun trick to show off to people. 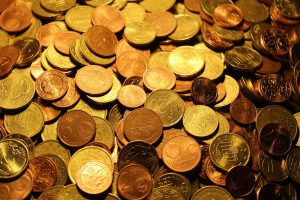 The vanishing zone is another cool trick that utilizes a principle magicians around the world are familiar with on a smaller scale.

The magician shows you a rectangular wooden box with the front cut out. You can see all the way through the box. The box also has a couple of holes cut on both sides, so you can pass an object through the middle.

Don’t worry if that sounds confusing! Here’s a great video that demonstrates a few of these tricks and the Vanishing Zone can be seen at minute 1:07.

This is one of my favorite magic sets at the moment. The tricks are great quality and are crafted from wood. Whilst there might not be as much quantity as some of the other magic kits out there, the tricks included are so much more individual and unique that it really stands out from the competition.

If you’re looking to buy a magic set for a child between 7 and 11, I’d recommend this kit. If you’re buying for anyone on the older side, Jim Stott probably has a better kit as the tricks are harder but more targeted at an older age range.

Did you find this guide useful? If so, please do share it with your friends using the social icons provided.

If you still have any general comments, feedback or questions feel free to go ahead and leave them right down below inside the comment section, or get in touch with me personally with the contact form at the bottom of the page. I’ll be back in touch within 24 hours!