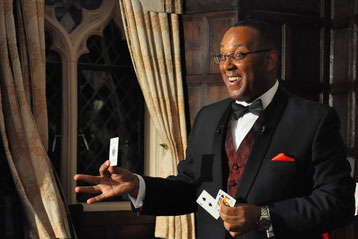 “His sophisticated performances take sleight of hand magic to a new level of artistic, authentic self-expression.”

“Relax and enjoy the ride! That’s what he seems to do.”

These three quotes having something in common… They’re all about one man, who goes by the name of Michael Vincent!

You might have seen him on Penn and Teller, or perhaps watched his incredible performance at the Magic Castle! But whatever source you’ve come to me from, do not fret yourself because you’re about to learn everything there is to know about the man, the myth, Michael Vincent.


So, shall we delve into his past a little together?

Where did Michael Vincent come from?

Michael Vincent is a British born Magician (like myself) who was (unlike myself) born in the year 1964.

He actually developed his love for magic in the 1970s, after watching David Nixon, Doug Henning, Fred Kaps, and Slydini perform on TV. Later he had the joy and luck of being mentored by escapologist and magician Alan Alan and even studied with Slydini for 4 days!

In an interview, Michael is quoted as saying, “This happened over a four day period. Never saw him again.” “In that week, it was a mixture of Dingle, time at Harry Lorayne’s place, time with Slydini, time with Richard Kauffman.”

Later in life, Vincent joined London’s Magic Circle and even won the award of a lifetime membership to the club’s Inner Magic Circle, with a Gold Star (for performing excellence).

I have to say the Gold star bit did make me laugh a bit… Just sounds like a very ‘magic club’ thing to win, doesn’t it… No attack on him though I definitely want one too.

In 2001, Vincent made the national newspapers in the United Kingdom, when he was hired by Scotland Yard to give a course to 20 top police chiefs involving the use of magic tricks to demonstrate communication skills.

He performed at Hollywood’s Magic Castle in 2003, and his television appearances include: The Paul Daniels Magic Show, Test the Nation (BBC 1), and Heroes of Magic – A Century of Wonder.

In 2011, Michael suffered the tragedy of a sudden overnight hearing loss leaving him partially deaf, a condition which if you’ve watched any of his recent performances you will know he still suffers from today.

Michael Vincent has been named Best Close-Up Magician three times by the UK’s Magic Circle, 3 times in three consecutive decades; 1983, 1991 and 2003, and was awarded the title of International Magician of the Year in 1993.

Never ridiculing or humiliating, Michael treats his audience with the utmost courtesy and respect. The Michael Vincent experience is a collaboration where the audience actively participates in the proceedings; an experience that leaves his audience touched, moved, and inspired.

Michael brings an amazing SPIRIT to his performance – a joy, a passion, and a sense of wonder.

Some of my thoughts of Michael Vincent

I just finished watching ANOTHER of his incredible performances, and I’m half-considering one more after I finish writing this.

Most magicians have heard of Michael Vincent, award-winning sleight of hand artist and student of some of the 20th century’s greatest magicians. But what they HAVEN’T heard of is this:

Michael also has a YouTube channel that puts out a LOT of really high-quality content—a combination of Michael’s own ideas on magic, stories from ‘back in the day’, and exquisite performances of effects.

Honestly, I’m amazed that not more people know about this. Michael is a three-time Magic Circle ‘close up magician of the year’ winner, a true legend of magic…and these videos are totally ‘flying under the radar’ for most people.

In this video, Michael talks about one of his heroes in magic, the legendary Argentinian magician René Lavand. He then demonstrates a stunning poker deal…one-handed.

(if you understand the significance of what I just said, you won’t need any more persuading)

P.S. I should mention that I’m not affiliated with Michael in any way. He hasn’t asked me to give him a plug. I genuinely just think you should check out his channel since it’s way underrated. Simples. So stop what you’re doing and go check it out 🙂

If you’re not the watching type, here’s the text for you:

Well, good morning, my friends, this is my call. I hope you all have a wonderful day today and it sets the foundation for an excellent week ahead. Today, I’d like to talk about the search for perfection. I never really thought about perfection as a concept until I saw a magician that would have a big impact on me. Let’s go back in time. In 1979, I walked into a magic shop on Wall Street. This was the magic place. It was a magic shop owned by Ken Brooks. And it really was an Aladdin’s cave because as soon as I walked in, I was overwhelmed and enchanted by the photograph. On the wall, I saw photographs of Bunny Neale, Fred Capps, Albert Gozman, Marvin Roy and all the great magicians. And the time I walked in, Ken was in the shop and he had just recovered from a heart attack. So his speech was rather slurred. But I would return time and again, and he was very friendly towards me and also his assistant, Frank Farrow. Now I mention this because there was a photograph on the wall of a magician that really caught my eye. He was tall, slim, handsome, black and white, photograph one hand in his pocket and he had a cane with a fan of cards. I didn’t know who it was at that time. And remember, this is 1979. I didn’t get that photograph.

Another thought, but it stayed in him. 1989, Christmas Day, BBC one, the Paul Daniels Magic Show, and it featured the legendary magician Rene Lamond. Now, I didn’t make any connections because I had heard of Rene, but I had never seen him work. So he appears on the show and I just fell in love with him. Oh, my goodness. Such a beautiful card. Magic. I think somewhere on YouTube you can see the actual performance that Renee gave on this particular episode of the Paul Daniels show. It was magnificent.

And sometime after he published his book, Magic from the Soul, I bought it. And in this book was the photograph I saw. It was a boy. It was Rene. So Rene Lafond has been in my life. He’s been in my orbit since I was six years old. I just didn’t know who he was until I saw him on the Paul Daniel show. Now, here’s the best part. I turned professional in 1991 and the Paul Daniels show went into a very interesting context. He created a segment within the show called International Card Stars. Each week he would feature a master sleight of hand. And I was chosen and I recorded my segment with Leonard Green and ran 11. And this is where I got to meet Renee for the very first time and his lovely wife, Nora. And I was able to have a little chat with him and so forth, and I could really get a sense of his charisma.

He said, come on, Mike, get the cards, your best shuffle. So I always feel the perfect shuffle.

Always works. Well, he seemed quite satisfied with that. You took the deck from me, spread them out on the table. And as he was going through them, I’m not sure what he was doing, but I think it was kind of examining them. Now we all know that Rene had an awful tragedy in his life and yet still the loss of his hand didn’t break his spirit. And he became one of the greatest sleight of hand most us that ever lived. He took my deck. And it did something that really brought tears to my eyes, look at this as he got used to that, that was in his hands.

He did a perfect split.

We’ve the corners together and did a perfect shuffle. I couldn’t believe it. I imagine you’d have to be locked up in Alcatraz for a hundred years to be able to execute a shuffle like that and a cut, he told me like when I was a young man, I would spend the wee hours of the morning in the nightclubs of Buenos Aries gambling. I was using my skill to gamble. And with that, you started to deal the cards out. And he told me at the time that he would gamble all night. Sometimes he would win, sometimes he would lose, and then one day to realize he needed to put his skill to better use. Can you imagine how astonished I was when he dealt me a full house, aces over King? And I said, well, I know you dealt me a good hand. What did the jail yourself? I said, you’d need a very good hand to beat this. You said yes. And he told me something that I’ve never forgotten in perfect Spanish and to tell our profession as possible. Alcantara La Excelencia in search of perfection, we can achieve excellence. And with that he revealed a perfect royal flush. And that, my friends, was the time I met Rene Lafond. He had a big impact on me. Stay tuned, because tomorrow I’m going to share another masterpiece with you. Thanks for watching.

I think this performance by Michael Vincent truly personifies who he is as a performer, you can’t help but be charmed by his humble performance and kind words even in the face of losing his trip to Las Vegas. Truly, when you know who his mentors were you have to see their style in every phase of this wonderful performance.

If what you just watched wasn’t enough for you! Please enjoy a longer clip of Michael Vincent performing at the Magic Castle!

If you haven’t already noticed Michael Vincent certainly possesses a style we all can learn from. I believe he possesses grace and elegance of performance, unlike many magicians of our time.

If I were to be tutored by anyone, I would sure hope it was Michael Vincent.