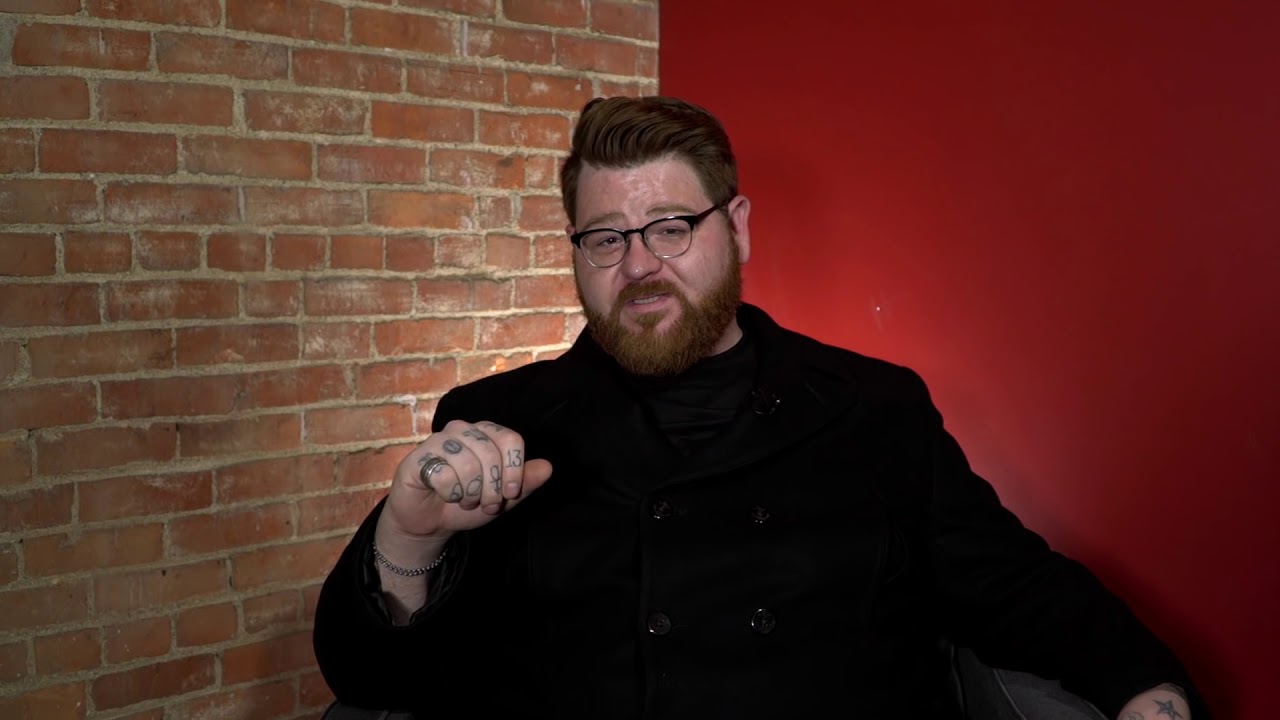 And he’s really good at it!

Point and case being the fact he’s published his projects with pretty much every magic company in the business.

Recently we had him our podcast, which you can listen to here:

And just to help you understand just how good this guys magic is, here are a few testimonials to get this post started:

“A creative force in close-up magic”

“Nicholas empowers you with tools needed for some of the most direct and visual magic. Clever and creative”

“If you want crazy visual magic that looks like trick photography in real-life, we have two words for you: Nicholas Lawrence.”

-Penguin MagicWell, I hope those quotes got you excited, because you’re about to learn a lot more about a real master of the art.

Well, there’s no better way to answer this question other than from the mouth of the man himself.

This is what he had to say on our podcast…

“You know, it probably started when I was maybe 11, 12 years old. And I just seen TV programs like Masters of Illusion or just any kind of magic you’d see on TV, like Pre Blaine, you know, and I was just really interested in it.”

“But there was something about it that I didn’t like. And I think that was kind of just like the, you know, eccentric kind of stage performance. And I steer away from that. But I was like, you know, there’s something to this. Let me go to my local library and see what they have”

“And I realized very quickly I was very into the mechanical prop side of things. I just thought it was absolutely genius, how simple these things were, but how effectively they were, even though this isn’t a focus, but, you know, fooling a person and then learning about the mysterious and the pattern side of things, the performance, the theatrical that stuff came later. But my obsession was mechanical things, how they work. And then I’d seen David Blaine show his very first show, and that’s what made me say, okay, I

I want to perform magic, but I want to do it the way he’s doing it in bars and on a street and just anywhere and everywhere.”

“And from that point on, I started creating my own stuff pretty early on. Most of it wasn’t that good. But as the years went on and I stuck through it and more research I did, I started realizing I was coming up with unique things and at the very least decent contributions to the magic in history.”

“Right. I love that it’s interesting what you said about the start. That most of it wasn’t any good, because I think this is something that I learned from copywriting, but they also say it for writing in general, basically, the first 500,000 words you write will suck. So just get them out there as fast as possible, and then you’ll get into the good stuff.” 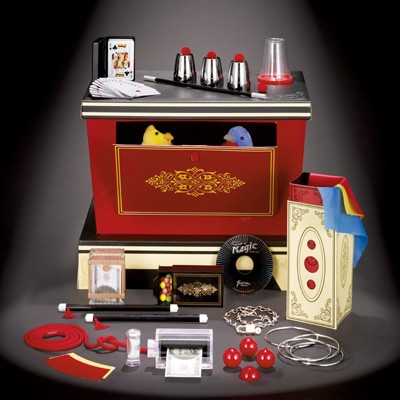 How did Nicholas Lawrence start in gimmick/mechanical magic work?

The following answer is from Nicholas Lawrence himself when he came on our podcast.

“Well, you know, in the beginning, I was more 50-50, because I definitely love sleight of hand stuff. I started with cards and I still play with cards every day. It’s like a magician thing. Right. You have a deck of cards around and you’re working on moves. But I definitely fell in love with the mechanical side of things that I think I’ve just always been naturally very curious of the world and how it works, you know, whether it just be just new products at the market, not a magic sense, but just in general”

“And I would always ask questions, ask my teachers, ask my parents, ask whoever just, you know, like, do you know how that works? Have you heard about that? What is that thing that’s kind of neat? You know, I think I’m just a curious mind. And I’ve always been a visual learner and a hands-on kind of person. So if I can just be hanging out by myself and researching magic and kind of getting inspired, I’m the type of person that will, you know, start cutting up, playing cards and glueing them together.”

“And playing with magnets. And I just find it very fascinating, but not to take away from the sleight of hand world, because I also really, really love sleight of hand, and I enjoy creating kind of that classic magic as well with just what I have, cards or coins.”

Nicholas Lawrence’s advice on ‘getting started’ in prop work!

During the podcast we were fascinated to know his view on getting started in prop work, here’s his response:

“Well, it’s definitely a difficult question, let me start with this. So for me, as a creator in creating gimmicks, let me start with the creative side of things real quick. It’s good to have a good understanding of what exists. So it’s the same as, you know, when you’re studying a sleight of hand magician and you can see all of the new moves that he’s created, but not only the new moves. So maybe the way that he’s utilized old moves in sync with other moves to create what you guys would consider a new routine or something to applaud is creativity.”

“That creativity is always there, regardless of whether it’s pure sleight of hand or gimmick work. But I think for me, just over the years, I know almost every, you know, prop that has come out in the market. And when I see those things, I retain them. And then also time and time again, I’ll come back to them and say, like, what is it about this prop, the way that it works, that maybe it could be better? Most people know that almost anything I’ve released gimmick-wise, I really like the ending clean factor.”

“So I kind of had that signature on all my gimmicks, mostly where you’re able to just slide off the gimmick without double stick tape or anything sticky, just keeping it elegant, keeping it as close to pure sleight of hand as possible. And so that’s my thing is, I look at gimmicks and say, like, what could help them be more visual, more smooth? And then we were talking about people who want to get into the gimmick world. It’s just a matter of just diving in and seeing what’s out there, see what kind of gimmick props you like.”

“Familiarize yourself with not only how they work, but how to perform them, what it takes. And then, you know, maybe you learn how to make a flat card a simple, color changing card, but to understand the value in how much more visual, you know, maybe a flat card is versus an erdnase change or a shake change or anything like that. Maybe there’s a point in your routine where it might call for that. You already have so much going on.”

“But you learn about a simple prop, like a flat card. And you see, how can I implement that into my sleight of hand work? Because that’s all really it is that’s what gimmicks are. They’re just tools, their physical tools versus, you know, a sleight of hand move.”

Gimmicks vs Sleight of Hand:

In our exclusive segment after the main podcast, reserved ONLY for Inner Circle members or buyers, we asked Nicholas a question we’ve been dying to know since the start of the podcast:

“How does creation work for you?”

Now, if you’d like to hear Nicholas Lawrence’s entire response, you’ll have the chance to purchase it later in this blog post email, but for now, we’ll reveal just one part of his answer!

See, for him, a huge part of being creative is being open to everything…

…which happens to tie into one solution for the entire gimmicks vs sleight of hand debate.

Simply put: why not use both if it makes the performance better?

And in Nicholas Lawrence’s own voice:

“You know, like for me, I’m totally okay with using sleight of hand or gimmicks and I think that’s really important for me as a performer… I take it very serious when I do perform and it is still my art.

So whether I choose it to be sleight of hand or gimmick magic, it doesn’t matter for me. For me it’s all about the end result, it’s how I’m going to be perceived and what they’re (the audience) is getting out of it.”

And if you thought those were impactful words, wait until you hear the rest of his answer to our question!

Plus, because we want as many magicians as possible to benefit from the ideas shared in this piece of training…we’re letting YOU decide how much you want to pay for it.

Whatever you can afford, you pay.

Click the link below to secure his exclusive training, plus 17 additional pieces of audio training from other world-class magicians:

(for as low as $0.50, just enough to cover transaction fees)

Oh, and it will only take you two minutes to learn!

Sounds too good to be true?

Click the link below and prepare to be amazed…

If you’d like to get your hands on Nicholas Lawerence magic, the best place to go is here:

We also have some exclusive audio training, featuring…

That’s all on Nicholas Lawrence for now, thanks for reading!