In this magic kit review, I’m going to give you the complete breakdown of what the Penn and Teller Fool Everyone Magic Kit offers, and whether it’s worth your time. Let’s get started… 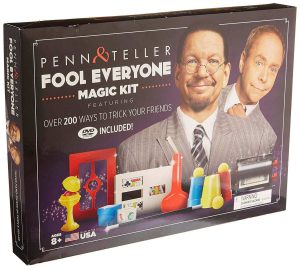 Boy, this is a good magic kit.

That’s exactly the kind of line Penn Jillete would be likely to say, as fans of the hit show ‘Penn and Teller: Fool Us’ will confirm.

But is it really?

YES! You can rest assured that, first and foremost, this is a solid choice of magic kit.

With an average review of 4.4 out of 5 on Amazon and the LOWEST review rating it as ‘not bad’, I think that the verdict is pretty final. Penn and Teller are such big names in the magic world that there was never a chance they would let their official magic set be sub-par.

So, what is the Penn and Teller magic kit?

This magic kit is ‘the’ official magic kit of Penn and Teller, and contains enough equipment to perform over 200 classic illusions.

Now, that doesn’t mean there’s 200 individual props, just that with the props provided you should be all set to learn hundreds of different tricks. You also get an instructional booklet put together by Teller and a DVD with instructions teaching you exactly how to do the tricks. 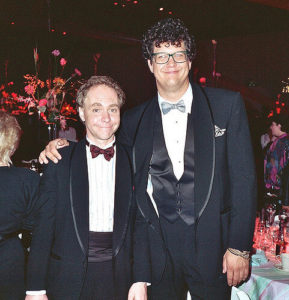 Who are Penn and Teller?

I know most of you probably know who these iconic magicians are, but for those of you who don’t, here’s some quick background info on the duo.

Penn and Teller are a pair of magicians who have their own running Las Vegas show (the longest running show in Las Vegas history…) and star in the show ‘Penn and Teller: Fool Us.’

They first started performing in the late 1970s, and are still going today! Over the years, they’ve performed HUNDREDS of magic tricks and watched THOUSANDS more.

With all that experience behind them, I think we can trust that whichever tricks made the cut for their magic set must be pretty decent!

Where can you buy this set?

You’ve got a couple of options. I think Amazon is your best bet, although you might be able to find it on other online marketplaces or perhaps the Penn and Teller website.

It’s in stock now, but it’s bound to go in and out of stock as we approach Christmas and the holiday season so you might want to play it safe and buy now, while it’s still in.

To be honest, the one thing I wasn’t a fan of was how hard it is to find the specifics on WHAT items you’re getting in this kit. But don’t worry! I went through and made a note of each item I found. Here’s the list: 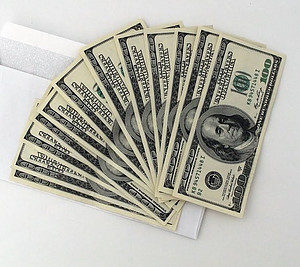 I don’t actually know the name of this trick, but Money Machine works pretty well. Imagine taking a blank piece of paper and turning it into cash.

Well, with this magic trick you can. Or at least, you can make it LOOK like that’s what your doing. Unfortunately you won’t ACTUALLY be able to transform paper into money.

But it still looks great! In fact, you can go back and forth between the money and paper as much as you want. You could ask a friend to borrow a 1 dollar bill, then turn it into paper and hand it back to him!

There’s a lot of potential with this effect and your imagination really is the limit here.

This is a great optical illusion that will definitely make people scratch their heads over. You show them an ordinary playing card and proceed to split it in half and restore it right before their eyes. 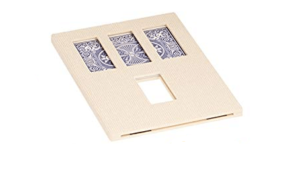 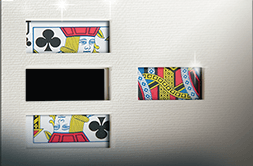 Even after you push part of the card out like this, you somehow restore it back to normal once you pull it out.

This is a very easy magic trick that makes for a great looking illusion and will baffle both children and adults.

This is one of those tricks that we’ve probably all seen somewhere before, but here’s a great new spin on it by Penn and Teller themselves!

Now, I’m not saying you’ll be able to perform magic this impressive straight away, but I hope you see how there’s so many different possible directions to take; you’re not limited to the cliche ‘now it’s gone, now it’s back!’ version.

Having said all that, I’m sure that even if you’ve seen this trick a hundred times, it will be something new for your children and they’ll definitely enjoy it as it is.

Sponge Balls are an AWESOME magic prop. While they might sound boring, they have SO MANY different tricks you can do. For example, one of my favorite sponge ball magic tricks goes like this:

You show the audience two normal sponge balls. You ask for a spectator to come and help you out.

Taking one of the sponge balls in your hand and closing your fist up tight, you ask the spectator to open their hand. Then, you place the other sponge ball in their hand and ask them to hold as tight as they can so you can’t do any funny moves.

Finally, you say the magic words and open your hand. The sponge ball has disappeared.

But’s that not the end of it!

You ask the spectator to open up their hand. Guess what?

Both sponge balls are inside their hand, which has been closed shut the ENTIRE time. 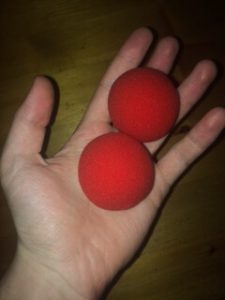 While this trick does involve a little sleight of hand and may take some practice for children to learn, it’s a really impressive trick that can be done with ANY two sponge balls.

But this is just one idea; there are literally HUNDREDS of different ways you can put the sponge balls to use. In fact, you can use them as part of the next trick…

– The Cups and Balls Magic Trick

Did you know that the Cups and Balls is possibly the OLDEST magic trick, ever?

That’s right. And you get to learn it as part of this awesome kit. 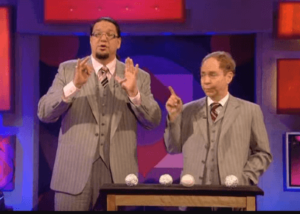 The Cups and Balls is a really fun and clever magic trick in which the magician shows three cups and three balls. He places the balls beneath the cups, only to discover that they seem to magically change cups while you aren’t looking.

The Cups and Balls is actually one of the tricks Penn and Teller are most famous for performing, so I’m not surprised they decided to include it in this set. Again, it is a great trick for both children and adults because while the concept is simple enough for kids to grasp, it can be really fooling and impressive if you practice enough with it. 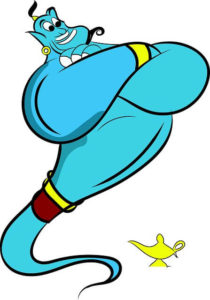 This isn’t one of the best tricks of the set, but it’s not bad either.

It definitely won’t fool adults but I’m sure kids will enjoy using it. The effect goes like this:

The magician takes a piece of rope and a plastic bottle. He puts the rope down the opening of the bottle. Once he’s done that, he lifts up the rope and it carries the bottle with it (the idea is that there’s a genie in the bottle, holding onto the rope).

You can then hand the same piece of rope and bottle to a friend to let them try. They won’t be able to do it! The bottle will fall every time.

Again, not a showstopper but definitely fun to do!

This is one of the coolest parts of the set. You take an ordinary looking playing card and place it within a plastic frame. The card actually goes physically inside the frame. But one card isn’t enough! You add another card to up the stakes.

You then take a pen and stab it right through both the cards and the frame. You can see the hole in the cards and can even see THROUGH the hole to the other side.

But, once you pull the cards out, the frame is untouched and there is not a single hint of a hole!

First of all, I hope none of these puns are being lost on you. Secondly, what magic set is complete without a magic wand? 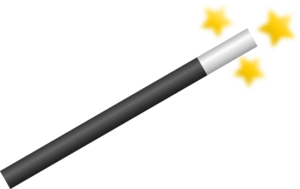 You get a couple of booklets. One of them is all about the tricks within the actual kit itself, and the other is one that teaches you over 125 different card tricks you can do with an ordinary deck of cards.

DISCLAIMER: You don’t actually get a deck of playing cards with this magic set, rather a booklet full of tutorials on different card trick effects. This was one of the only ‘negative’ points people had to say about this kit.

Luckily, playing cards are really cheap to come by and chances are you might already have a set or two lying around in the house.

The instructional booklet is great, but the DVD really helps out those visual learners who find it difficult to learn solely from books. This should be really helpful for children trying to make sense of it; the booklet may be a little complicated for them, whereas the DVD is super simple to understand and watch.

So, I think that’s more or less it. There might be a couple of other items I neglected to mention but these are the main parts.

This magic kit is ideal for younger children between 5 and 12 (just my rough guess, lots of other reviewers apparently bought for younger/older and it went well). The tricks are fun and impressive, but very easy to do.

However, I WOULDN’T recommend this kit to someone buying for a child looking for more of a challenge. If you’re buying for someone over 10, the chances are that they will prefer Jim Stott’s Ultimate Magic Kit, as it includes a lot more REAL magic tricks used by professionals.

So, while the Penn and Teller Fool Everyone Magic Kit is a great pick for younger children and is super fun, it might not quite make the cut for children who are looking for something a little more advanced/fooling. In that case, check out the magic kit I recommend for older children!

Thanks for reading! If you found this post useful, please do go ahead and share it using the social icons.

Do you still have any unanswered questions? Feel free to leave your questions, feedback and comments in the comment section down below and I will personally get back to you within 24 hours. Alternatively, you can use the contact form at the very bottom of the page to email me directly.