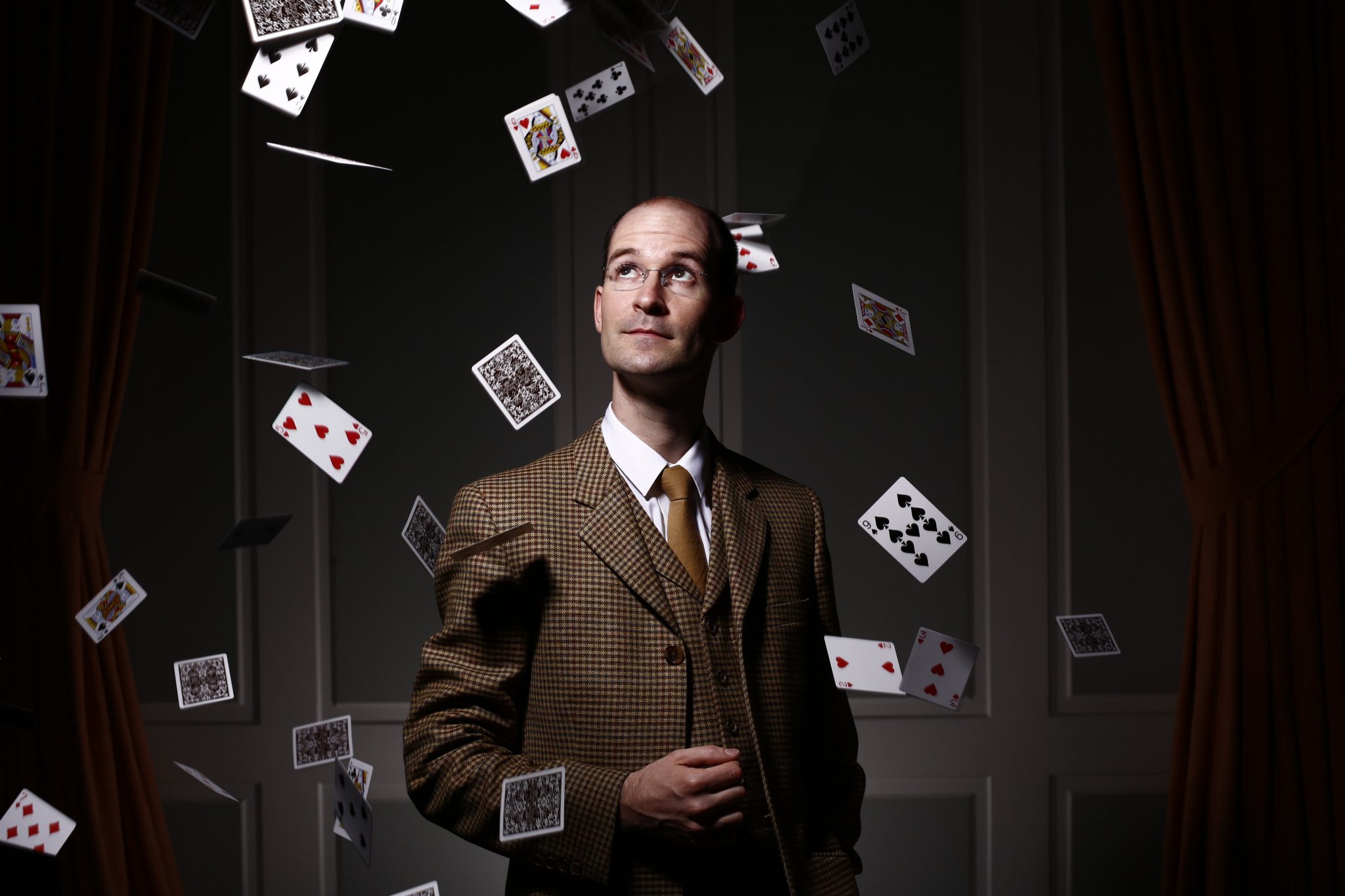 Who is Pit Hartling?

Here at The Daily Magician, we’re huge fans of Pit Hartling, certainly, he has inspired much of our own magic performances. But don’t take our word for it! Here are a few quotes from some of the best magicians in the world to back us up!

“In the first years after ‘Mnemonica’ there were many contributions in form of ideas and tricks by many magicians, but without a doubt, the most coherent and creative corpus, the most distinct and profound work were the effects created and published by Pit.”

“Pit Hartling is one of the best card magicians on the planet.”

“(On his book in order to amaze) Don’t let the subtitle “A Collection of Memorized-Deck Magic” fool you: this book is of tremendous value to anyone who’s interested in clever, artful card magic – regardless of whether or not you ever use a memorized deck”

So what is all the big fuss about?

Shall we start with a little history lesson?

The History of Pit

From the interactions we’ve had with Pit Hartling, he can come off as quite the understated magician, yet he’s actually been a prodigy of his work for quite some time now. At the age of 17, he won second place at FISM in Tokyo, Japan.

After studying literature, philosophy, and psychology at Frankfurt University, Pit Hartling finally turned to his vocation full-time and is now one of Germany’s most requested magic-entertainers. He is also a member of the celebrated Fertigen Finger, a group of 10 German magicians who have won international accolades.

Over the last years, bookings led him through all of Europe and the US, as well as to South America, South Africa, Israel, Japan, and Australia. 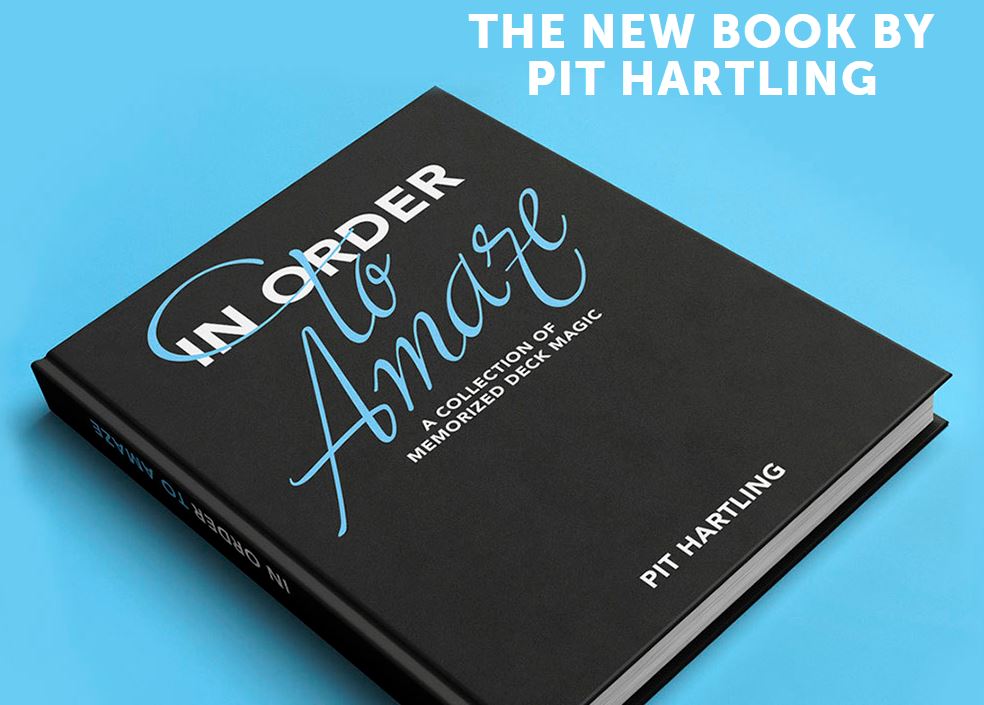 In Order to Amaze by Pit Hartling

Again, here at the Daily Magician, we’re massive fans of Pit Hartling and especially his book: ‘In Order to Amaze’s

Which is full of beautiful routines and innovative principles.

We’ve read a lot of memorized deck books and there are a LOT out there, but none quite like this one.

Not even just by magicians.

This is a book that should be read by everyone, everywhere!

In this amazing piece of work Pit Hartling Explores (in his own words):

A wide range of original effects, plots, and methods for the memorized deck (of the twenty-one routines,

Catch Me If You Can

It‘s sleight of hand vs. test conditions in this impossible two-deck sandwich routine.

Deal any poker hand to any number of players. A Full, Threes over Jacks for nine players? You got it. (No math or memory required).

The same cards from different decks like to meet up and hang out. A best-buddy triple coincidence.

An incredible “impossible location” using a shuffled stack (!) (Oh, and it’s funny, too!)

Find a thought-of card and see why a deck is like a piece of fruit. Also: How to peel a deck!

Why do all the work alone? This time you find their thought-of card – and they find yours!

A gambling demonstration for people who don’t play cards: Duplicate random hands from a shuffled (!) deck.

A slow-motion quadruple stop trick. Not so easy, but Oh. So. Fair.

Top of the Heaps

Four random packets. A freely named four-of-a-kind. And for once, the laying-on of hands really works!

Four packets change into a Royal Flush? In one second, with one hand, without looking? Yep.

Cut to a freely named four-of-a-kind – that was actually in your pocket the whole time!

A triple back and forth changes of random cards into a named quartet. Highly visual (and rumored to get screams!)

The enchanted deck that will grant your spectators’ wishes! (Talking frog not included).

The Right Kind of Wrong

Sometimes dead wrong is exactly right – if only seen from another deck!

For more about this go check out his site: http://inordertoamaze.com/#order

Watch the Master in Action

Now, no discussion of the memorized deck and Pit Hartling would be complete without a poker demonstration.

Here’s our personal favorite up above!

Once you read ‘In Order to Amaze’ you will laugh out loud at how devious and blatant this routine truly is!

Here’s another routine from Pit Hartling which I love! I mean… Just go look at it… The skill and mastery required are just beyond talking about…

More Pit Hartling for You!

(Taken from one of our daily emails!)

I’ve been immensely enjoying ‘In Order to Amaze’ by Pit Hartling, the German magician whose work with a memorized deck is second only to the Maestro himself, Juan Tamariz.

“In the first years after ‘Mnemonica’ there were many contributions in form of ideas and tricks by many magicians, but without a doubt, the most coherent and creative corpus, the most distinct and profound work were the effects created and published by Pit.”
— Juan Tamariz

So there you go.

Anyway, I’m telling you this because there’s a great interview between Pit Hartling and the guys from Conjuror Community floating around on the interweb—an interview that I happen to have a link to, which you can enjoy by clicking below.

Here’s what you’ll discover in this illuminating discussion:

* How Pit’s love for magic drove his school friends crazy

P.S. This 30-minute interview is a small slice of the kind of activity we’re getting up to all the time inside the Conjuror Community Club.

If you’re interested in this kind of thing, today’s the last day I’ll be giving away 30 days for just $1.

Pit Hartling is one of the best magicians out there… And he certainly has inspired us to look beyond the basics of magic and grasp in the heavens!

Please if you haven’t already explored his magic, a great start is In Order to Amaze, Pit Hartling will not disappoint.