For me, card manipulation has always been the most graceful and beautiful of all styles of magic. It reminds me of some kind of a dance, only with small rectangular bits of card.

Seriously though, card manipulation may look easy, but let me tell you, it is flipping rock-hard! If you are interested in getting into card manipulation and learning seriously advanced card tricks, I would advise that you ensure you have at least a couple of hours a week to practice, otherwise it will be very difficult for you to make any progress. However, if you do dedicate yourself to it, you will be able to perform miracles with only a pack of cards that other magicians dream of.

What is card manipulation?

Card manipulation used to be very popular as a form of ‘parlour magic’; it was seen as very gentlemanly to be able to pull cards out of thin air, for some reason. It requires very strong sleight of hand, and involves (but is not limited to) making cards: appear and dissappear, change colour, change location (e.g from the deck to your pocket), flourish (fans and spreads etc.), and generally do exactly what you want them to without others noticing. 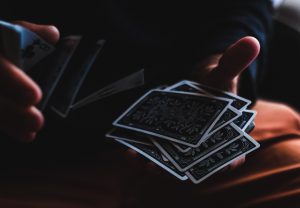 Card manipulation really is a broad topic; it’s worth considering if you want to zone in on one particular area, like false deals or palming.

Studying either of these two to an advanced level could take years- but the payoff is huge as they enable you to perform card tricks that not even gimmicks can accomplish. It’s also worth asking yourself whether you would rather be a ‘jack of all trades’ in that you have a decent amount of knowledge and skill in multiple areas of card manipulation, or a ‘master’ of one specific area, such as false shuffles.

Either way, it is an exciting journey you’re about to make into one of magic’s most highly respected disciplines.

There are many, many sleight of hand artists that have caught people’s eyes over the centuries (yes, it really is that old a practice), so instead of naming them all, I will give a brief explanation on which are my personal favorites.

Richard Turner is perhaps the greatest living card mechanic, and has the ability to stack a shuffled deck within minutes, fooled Penn and Teller on live TV, and has a documentary made after him (Dealt). Oh, and he’s blind.

Ricky Jay is not only a incredible stage magician, but also a very funny performer. I recommend you watch his appearance on Conan purely for it’s comedic value.

Jeff Sheridan is often labeled as the father of modern street magic, and for good reason. Take a look at this great old-school video of him performing.

Cardini was one of the first ‘great’ card magicians- he was born in 1895 (and techniques he used are still being used today, over 120 years later). He was known for wearing white gloves as he performed; if you’ve ever tried sleight of hand in gloves, you’ll probably have a better understanding of why he is so respected.

In terms of modern magicians, a magician by the name of Shin Lim took the internet by storm in 2015, and his influence is growing today. He has great sleight of hand ability, but it is his ability to perform in time with the music that makes his act so breathtaking.

Is card manipulation right for me?

Honestly, the best way to figure that out is just to pick up a deck of cards, and just have a go. There are plenty of free tutorials on YouTube that do a great job in teaching the basics. 52Kards is a very useful channel for card manipulation techniques.

If you work your way through the essentials and still feel that card manipulation is for you, then I would recommend looking into more weighty courses, such as the Sheridan Course in Card Manipulation (taught by the man himself) which focuses mostly on very visual card manipulation, or the Tools of the Technician course taught at 52Kards (more tailored toward invisible sleight of hand techniques such as false deals).

If you want something a little lower priced, try some of the classic card manipulation books like ‘Expert at the Card Table’ or ‘Expert Card Technique’. You can find both of these for under £10 from most magic shops, or alternatively, Amazon. These books are great value for money; they contain literally hundreds of detailed explanations of moves and sleights, but they can be difficult reading at times. Try using them in combination with DVD and video courses; you’ll be able to get much more insight on both sides.

Again, don’t be discouraged if the moves are difficult at first. Generally, the more difficult a move is, the greater the reward will be when you are finally

good enough to insert it into your tricks. But one thing I would advise against is not bothering to learn certain moves because they seem to hard, or promising yourself you’ll learn them later. Put the effort in now, and you will thank yourself when the day comes.

I hope you enjoyed this brief overview of card manipulation, and if you want more information about the topic, then I would definitely recommend watching Dealt; a documentary that explores the incredible story of how a blind man became the world’s best card manipulator, or leave a question below and I will reply within 24 hours!