It’s time we had a look at The Prestige movie explained.

The Prestige is one of my favorite magic films of all time, and I’ve seen it over and over again without ever getting tired of its sheer brilliance. However, there are so many different explanations out there discussing what the ending meant that who knows what was really going on in Christopher Nolan’s head?

Read on to find out. 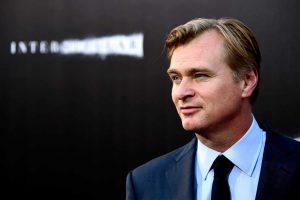 Here are 3 of the best explanations for what really happened during the mystifying climax of The Prestige and my personal review.

DISCLAIMER: Spoilers will be present. Don’t read if you haven’t seen the film yet. Go do yourself a favor and watch it first!

So, let’s start out by briefly explaining what appeared to happen in The Prestige, and then we’ll discuss what this could mean.

The Prestige is a film about two rival magicians who try to upstage each other until it turns deadly for both of them. Angier (Hugh Jackman) is a talented performer but Borden is the true magician, and blows Angier away with his original trick, ‘The Transported Man’.

Angier copies Borden’s trick and calls it ‘The New Transported Man’ but is not satisfied with letting his body-double take all the credit, and eventually Borden takes back the trick by bribing the double and stealing Angier’s audience.

Angier, who still doesn’t know how the trick is done, blackmails Borden into giving him the secret by kidnapping his assistant, Fallon. Borden tells him that he uses a machine by Tesla to buy himself time, not knowing that Tesla would end up actually building such a machine for Angier. 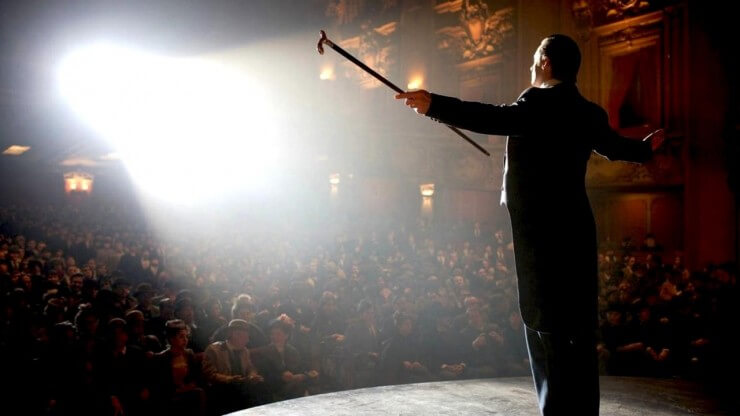 Angier uses the machine to clone himself and so begins a new show, creating a new clone every night. Borden can’t work out how it is done and ends up sneaking backstage during one of the performances, only to be witness to Angier’s clone falling into a water tank.

He is wrongly blamed for the clone’s death, and sentenced to death.

Borden apparently hangs, but at the same time we see him shoot Angier in an abandoned prop storage area. How is this possible?

It’s revealed that there were actually two Bordens all along– they were twins. They took turns pretending to be Fallon, the assistant, and each loved a different woman.

Borden is reunited with his daughter and is seen off by Cutter.

But is that everything? Let’s take a look.

The Prestige Movie Explained, Version 1 : The film itself is a magic trick.

To truly understand this film, it’s important that we go all the way back to the beginning.

Do you remember one of the first lines of the film? Michael Caine (Cutter) says ‘every magic consists of three parts, or acts.’

There’s a reason this is one of the opening lines; it foreshadows the development of the film itself, which manages to become a magic trick in itself. Any students of film out there will be able to tell you that film often follows a ‘three act structure’ which in this case happens to mirror the 3 components of a magic trick. 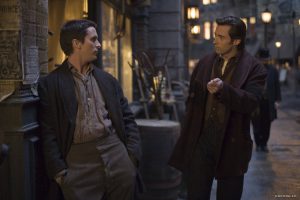 Then, something extraordinary happens; the magicians begin having a vicious battle over a trick, eventually culminating in the death of Borden.

But that’s not enough, as Cutter says. We have to bring him back, which is why The Prestige (or third act of the film) takes place as Borden reappears to shoot Angier, and the two confess everything to each other. 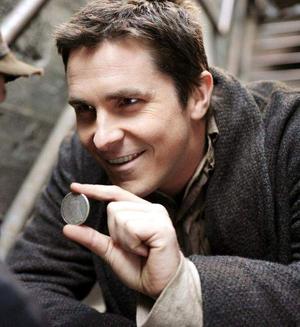 It’s an interesting idea; the film definitely seems to mirror the structure of a magic trick, and it isn’t the only extended metaphor we see.

What about the disappearing bird and the seemingly innocent question ‘but where’s his brother?’ that tips us off early without us noticing? Or the Chinese man with the water bowl between his legs that reflects Borden’s own sacrifice?

The film also uses other conventions of magic tricks, like misdirection. A magician will try to make you look away at the right time or divert your attention from the real method.

In The Prestige, we are told the secret early on as Cutter adamantly says ‘he uses a double!’ but this explanation seems too simple, and Nolan misdirects us from it by taking us to Tesla with Angier.

We expect the secret behind Borden’s illusion to be so impressive that we completely ignore the truth staring us in the face, which is a classic technique of magic used brilliantly in film.

The Prestige Movie Explained, Version 2: The machine doesn’t work, we just think it does.

This is a really interesting alternative explanation that I saw on Reddit and although I don’t personally agree I think it’s worth mentioning here! There’s all sorts of other cool sites you can find when you search for ‘the prestige movie ending explained’ and its definitely worth going and looking at some alternate theories too!

Remember one of the key lines of the film?

‘You want to be fooled.’

The whole film is about the fact that magic is just an illusion, and there’s always a simple explanation if you know where to look. Why then did it suddenly drop a crazy cloning machine in and claim that it was real?

The argument goes that the machine never actually worked, we just wanted to be fooled as an audience, so ignored signs that Nolan was just playing a trick on us.

According to this theory, Borden knew Tesla and agreed to send Angier to him as an easy target to get some money from, as Borden knew Angier would fall for Tesla’s claims that he had such a machine.

However, in reality Tesla was just using Angier’s money to keep up his funding and strung Angier along with a wild tale of a ‘magic’ machine that Angier was foolish and obsessed enough to buy into.

The scene with the cats and the hat may have been set up by Tesla to convince Angier the machine was working, in order to get more money out of him. As soon as he has what he wants Tesla makes a convenient speedy exit, leaving Angier with a broken machine. 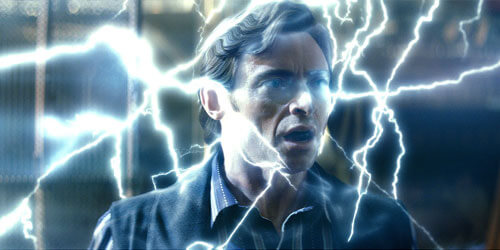 Angier, instead of giving up, decided to reverse the con on Borden. He uses a body double again but with the machine from Tesla in an attempt to convince Borden he really did get a magic machine from Tesla. Angier knows that Borden’s curiosity will get the better of him and stages it to set him up for ‘murder’ falsely.

This would explain the final line of Cutter – ‘now you’re looking for the secret, but you won’t find it because of course – you’re not really looking. You don’t really want to work it out – you want to be fooled.’ 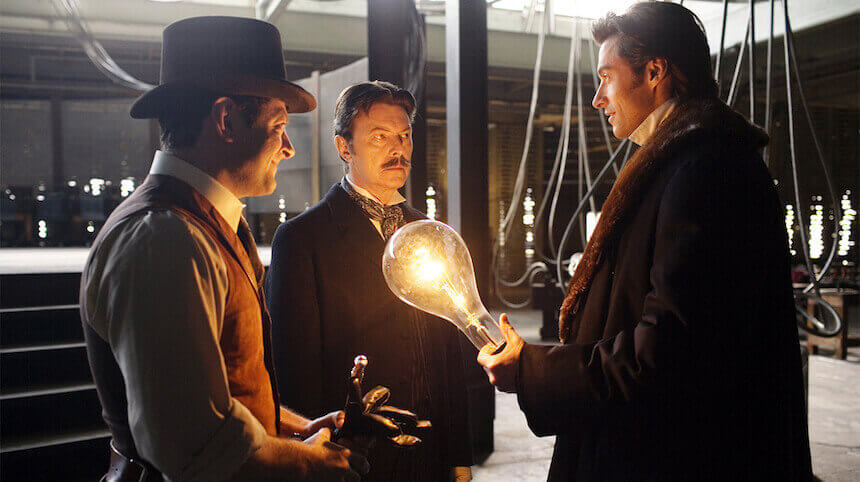 We know that something isn’t quite right with the narrative, but we want to believe he really did have a cloning machine and so ignore these problems because we want to be fooled by the film itself.

This is a really cool theory but there are a couple of issues with it. If it was a double in the tank, why did Michael Caine believe it was Angier? He apparently ID’d the body, surely he would have noticed if it was a double?

If you think there’s an explanation to that question feel free to jump into the discussion and let me know in the comment section below!

The Prestige Movie Explained, Version 3: We don’t want to know the explanation. 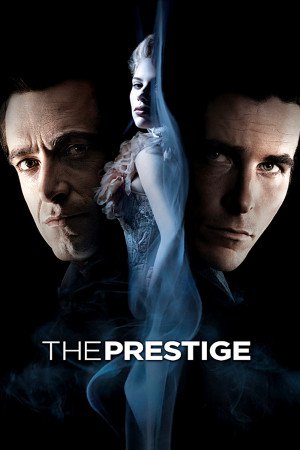 This one is a little less detailed than the others, but it is definitely worth a shout. The truth of the matter is, maybe there are more hidden alternative explanations or tricks within the film, but we just don’t want to know.

A magic trick is always enjoyable when we don’t have it quite figured out, and this film is no different. The whole enjoyment of The Prestige is trying to wrap your head around it; if we got the whole explanation there would be nothing to speculate or wonder about?

This again links in to that key line ‘you want to be fooled.’

There’s no denying that it is much more fun to watch it without fully understanding, which is in itself the whole point of the film. Just like in magic, we prefer letting our imagination fill the blanks rather than the actual explanation.

So, overall, The Prestige is my favorite Nolan film and one of the best films ever made. Of course, it might be worth checking out the book it was based on, written by Christopher Priest, which I’m sure will only heighten your appreciation of the story.

Here’s a great video I found on the channel Nerdwriter1 discussing some of these exact theories!

Did you agree with these theories? Do you have any alternative theories that haven’t been mentioned yet? If you do, feel free to leave them in the comment section below and I’ll get back to you within 24 hours!

I hope you enjoyed my two cents; the Prestige movie explained is still just as much of a mystery as before for me.